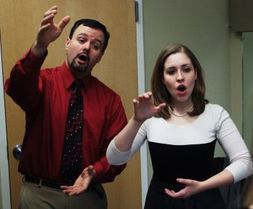 My philosophy of music education is multi-faceted. It is the product of active teaching and learning historical and current philosophies of music education. In addition, my philosophy relates both to my position as a choral educator, but also as a more broad philosophy of music education as a whole. I believe in hands-on, meaningful education filled with reflection for both teachers and students. My belief is that music education should be holistic, educating the whole student for a future within an ever-changing 21st century. I believe that music should be experienced, both formally and informally, at every age, as its importance lies in the development of relationships between people in social and cultural contexts, as well as a development of the self in mind, body, and intellect.

Meaningful
Intentional Musicking
In my experience, humans can independently relate to music in some way. It is not my goal as a music educator teach the “appreciation” of music, as most students already have an appreciation for music as a general concept. Music is pervasive in today’s world. Instead, my mission as a music educator is to cultivate meaningful experiences with music such that students have an active, transformative experience with it. I believe that students best learn through active musicking and experiential learning that is intentional, taking into account the prior knowledge of the students. New meaning then builds on that foundation.
Contextual
Every student that walks into a music classroom has a background. By building upon their prior understandings, students in a music classroom are valued, rather than having a strict divide between the outside world, often viewed as of little value, and the lofty classroom music.
I believe that music education should be meaningful for both students and teacher, and thus education should be centered around assisting students in finding meaning within their music-making. In a dialectical classroom, students and teachers work together to identify and develop meaning within music. I do not believe that is possible, nor productive, to have a music educator instill meaning into music for the students. Instead, music educators should structure their teaching in a way that allows students to discover and make meaning for themselves, allowing prior cultural and social experiences to illuminate meanings within the new knowledge. This method of music education is student-centered and inherently social, incorporating dialogue between students and teacher.
Music is based on the cultural norms of the society in which we live. Developing critical thinkers with relation to music occurs within this social and cultural context and cannot be separated (Abrahams, 2014). Due to the contextual nature of music, I believe that music education classrooms should reflect the culture in which it stands. Every student deserves to find success and build meaning in music. Therefore, I believe that our classrooms must reflect the students that we have, which will vary based on the needs of those in the classroom.

Holistic
21st Century Skills
I believe that music educators should educate the whole student, in mind, body, and intellect, guiding them as they learn the 21st century skills necessary to lead a meaningful life outside of the classroom. We cannot predict what the world will look like for the future lives of students. Instead of preparing them for today’s world, I argue that we should help them develop skills such as the 4 C’s of Creativity, Critical Thinking, Collaboration, and Communication (National Education Association, 2010), and an additional C that I would add, which is Character. I believe that these skills can be established through meaningful interaction with music, then transfer into the musical and social contexts in the future.
Dialectical and Reflective
I believe in empowering students to be the active learners and leaders of the classroom. For example, I believe in ensemble settings where singers are empowered through problem-posing (Abrahams, 2014) to reflect on their own learning and performance, developing the necessary tools to better themselves as musicians. This relationship is one where the teacher is not perceived as all-knowing, but rather a facilitator of knowledge and interaction. While I believe students should be reflective and dialectical, I believe that teachers must also be self-reflective, looking at current and past teaching models to find the teaching that best meets the needs of the students in the classroom.

Musical Agency
Praxial Learning
I believe that music educators have an obligation to set up students for success in musical contexts by working to build musical agency within the students. Musical agency is developed as students understand the discourse of the subject such that it is transformative and transferrable to their outside lives. A praxial view of music education (Elliott & Silverman, 2014) argues that the active participation in music will empower the students to identify themselves as practicing musicians. Expanding musical discourse in students to me means developing musical literacy. I would define literacy as more holistic than the traditional definition, enveloping the decoding of notation to improvisation, critical listening, performing, creating new music, and creatively responding. This literacy is rooted in gaining a deeper understanding of musical skills that students can transfer to external contexts. In the words of Regelski (2014), “artists do not adapt to the world as it is: They change it. They add something new” (p. 73). Whether changing the world by and individual creating new meaning through art, or by using music as an agent for world change, I believe that it is our responsibility as music educators to utilize music as an agent for developing people such that they can change the world, both for themselves and for those around them.

Conclusion
I believe that music education should have a dialectic and reflective relationship between students and teachers. I believe that each classroom and rehearsal hall should vary based on the needs of the students and teacher in their social and cultural contexts. I believe that all people should have the opportunity to study music in the schools, such that formalized and informal music education work together. In-class learning should expand on the pre-existing knowledge of the students, then helping the students develop the discourse and skills necessary to transform that which they experience in their outside world. Music is a powerful agent for change, and by looking to the future of 21st century, I believe that music education can change the world. When meaningful music is made, people will listen.
To me, music can be provoking and transformative emotionally, thoughtfully, and otherwise. Music can inspire connection between mind, body, and intellect. Whether my students come to the choral rehearsal with the goal of provoking our audiences, or if they are there to evoke subtle changes in themselves as they dive into meaningful music (made meaningful by their connections within social and cultural contexts), I believe that these transformative experiences are my goal as a music educator. My philosophy of music education is that assisting students in building the discourse necessary to develop themselves within music and helping them to make meaningful connections is what empowers students to find their voice.